On Wednesday, former model Brittney Lewis came forward with allegations that illusionist David Copperfield drugged and sexually assaulted her in 1988. She was 17 at the time.

Lewis claims that the assault took place in Copperfield’s hotel room, where she was staying after being invited to watch him perform one night. Lewis tells The Wrap that the morning after she was allegedly drugged and assaulted (she had blacked out), Copperfield told her nothing had happened. She claims he specifically told her, “I didn’t enter you.”

The statute of limitations prevents Lewis from filing criminal charges. She tells The Wrap she is not interested in filing a civil suit.

Here’s what we know about Brittney Lewis and her allegations:

1. The Alleged Incident Occurred After One of Copperfield’s Shows in 1988

Lewis claims that in 1988, Copperfield drugged and assaulted 17-year-old Lewis. He was 32 at the time.

Lewis tells The Wrap she met Copperfield after he judged her in a modeling content in Atami, Japan in 1988. She says that not long after returning home to Utah, Copperfield extended an invitation to attend one of his shows in California. Copperfield reportedly asked permission from Lewis’ primary caretaker, her grandmother Patricia Burton, who said ok.

Burton tells the outlet, “He said, ‘Don’t worry, I’ll take care of her… I believed him. He was very charming.”

Lewis says that Copperfield treated her well for most of the event. He introduced her to his team “with great fanfare.” Lewis says he did, at one point, try to hold her hand, but she told him they were “just friends.”

2. Lewis Claims Copperfield Poured Something into Her Drink

After the performance, Lewis tells The Wrap Copperfield invited her to a bar where she noticed him pouring something into her drink. “I asked, ‘What are you doing?’ and he said, ‘Oh, I’m just sharing,’” Lewis said.

Lewis claims she blacked out not long after. “I remember my clothes being taken off,” she said. “He was kissing my face and then I remember him starting to go down on my body with his face, and then, as soon as he started going down, I just completely blacked out.”

Lewis, a former model, was selected as just one of 25 US women to compete in the international model search for ‘Look of the Year’ in 1988. The competition was sponsored by Elite Model Agencies and John Casablancas.

A Salt Lake Tribune article from 1988 that centers on Brittney’s modeling career reveals that she was forced to miss class a number of times growing up to pursue her career– she even spent “several months modeling in Italy.”

3. Copperfield Is Married and Has One Child

Copperfield has been with his current wife, Chloe Gosselin, since 2006. Together, the couple has one daughter, Sky.

According to a 2014 article in E!, the family splits their time between Las Vegas, New York, and “their own Caribbean hideaway known as Copperfield Bay.”

In an interview with E!, Gosselin said that Copperfield often shows him her tricks, but she’s not easy on him. “I’m a pretty tough audience,” Gosselin admits. “So he will come to me, show me the tricks.”

On January 7, Gosselin took to Twitter with a photo of herself that read, “Time’s Up”.

4. Lewis’ Husband, Grandmother, Ex-Husband, and Friend Claim She Told Them Decades Ago About Her Alleged Experience with Copperfield

The Wrap writes that they spoke to Lewis’ best friend from high school, husband, ex-husband, and grandmother, “all of whom said Lewis told them decades ago about her accusations against Copperfield.”

According to the outlet, a chiropractor also said Lewis informed her of the accusations three years ago.

In her interview with The Wrap, Lewis says that after the alleged incident, Copperfield reportedly asked her to write and sign a letter “saying she was OK, despite what had occurred.” Lewis says her therapist has since told her that the letter was a contract to keep her quiet.

5. Copperfield Recently Posted About What It’s like to Be ‘Falsely Accused’ 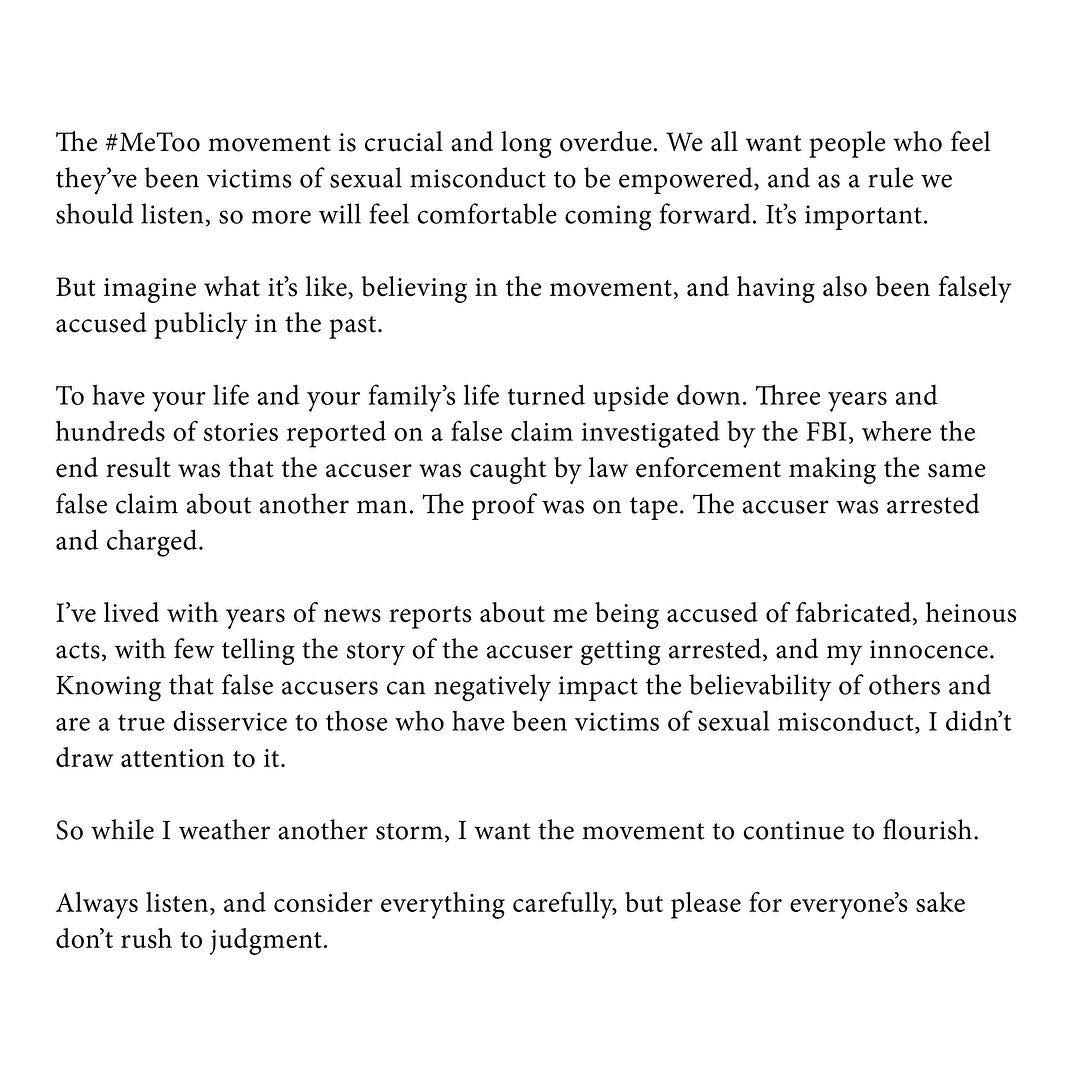 On Wednesday afternoon, Copperfield took to Twitter with a long post about the #MeToo movement. He described the movement as “crucial and long overdue” and encouraged those who have been victims of sexual misconduct or abuse to come forward.

He continues, “But imagine what it’s like, believing in the movement, and having also been falsely accused publicly in the past…. To have your life and family’s life turned upside down.”

This isn’t the first time Lewis says she has spoken up about the incident. She claims that while Copperfield was being investigated for another sexual assault in 2007, she came forward to the FBI but her “cries fell on deaf ears.”